Northampton were disappointing last season, everyone expected them to be in the play-offs having finished first before the play-offs the season before.

Northampton have some star quality in the pack with England captain Dylan Hartley at hooker, Courtney Lawes at lock and England new boy Teimana Harrison also part of the club. 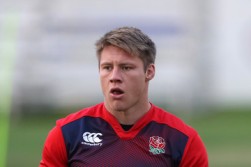 Teimana Harrison is a key player.

Northampton Saints have developed a rather substantial pack full of heavyweight, international stars. Hard carrying, hard tackling machines in what is an explosively powerful eight. They give what the backs front foot, clean ball.

The backs are also big men, George North, Luther Burrell, George Pisi, big, physical players who like to run hard and tackle aggressively. Physical backs give Northampton thrust to go forwards and punish the opposition. They can however be one dimensional.

Ben Foden was the best fullback in the country at one point. He is fast and the Northampton man has quick feet defenders can be beaten one-on-one by the quick, agile fullback.

Foden’s kicking game is also very useful as an exit strategy, he can be used as an extra playmaker in attack.

The hard running Saints flanker has gained caps against Wales and Australia he looks as though he will be a force in the future for England.

His work in the loose is hugely effective, he is one of the most defensively sound players in the league and his influence in attack makes him a valuable member of the Northampton squad.

Picamoles is now widely regarded as one of the best number eights in the world along with the likes of Kieran Read and Taulupe Faletau. His power when he carries is quite extraordinary.

Picamoles is devastating off the back of a scrum and brutal coming round the corner. The French powerhouse can effectively take the game to the opposition using his brute force.

Picamoles is a marquee signing and will be hugely beneficial to the squad, he is the type of player Northampton breed. Groom is also a tidy addition to the squad, he passes well and his pace is exceptional.

The England prop will take a sabbatical.

Fotouali’i is a loss and he moves to Premiership rivals, Bath. Corbisiero is taking a year out that should not be too much of a trouble he is not the player he was three years ago.

Northampton Saints will be powerful and use forwards to build a platform, the worry is their signings indicate no change of strategy very little other than the power plays, teams like Exeter and Wasps with their quick backs could trouble them.