With approximately a year to go until the Lions tour New Zealand I analyse my XV that I would have if the first test were to be played tomorrow. Following English and Scottish test series wins and Ireland’s victory in their first test, the northern hemisphere looks to be recovering from the World Cup.

It has to be the English prop. Jack McGrath is very close behind. The Saracens man has a hugely improved scrummaging game and his work in the loose is wonderful. This man carries as much as and makes as many tackles as any back row. Streets ahead of any of his home nation compatriots.

The England skipper has led England to nine wins in nine games. His abrasive nature and dogged determination make him a hugely influential player. He has to go and he has to go as captain. He has tempered the fiery nature that saw him pick up 54 weeks worth of bans and has become a totem of self control and power. He leads from the front and he won’t be found wanting in the desire category either. Does his bread and butter of the set piece to perfection.

Nel is a hugely important part of Scotland’s scrum as well as being a key defensive cog in Scotland and Edinburgh’s systems. Dan Cole is very close to the South African born prop. The scrum will be key in New Zealand and Nel is possibly the best scrummaging tighthead in the world.

Anyone who thinks Itoje should not go on tour with the Lions must have been living under a rock for the last year. The Saracens lock is fast, strong and in form. His work over the park in the loose is wonderful. He is so talented he has become one of the best in is position in the world and just thinking about him matching up against Retallick is a mouth watering battle.

Jones gets in due to the contribution he can give in terms of experience. He is a physical player and will add another lineout option for the Lions. Jones is one a very few Wales players that has played well in New Zealand. Kruis, Toner and both the Gray brothers aren’t far away.

The Harlequins man has been redeemed well and truly since Eddie Jones took over, the best blindside England have had for years. His tackle rate and the amount of work he gets through is monumental. Lydiate is close but after this man’s performance in Australia he is impossible to leave out. England now have one of the finest back rows in the world and Chris Robshaw is a huge part of that.

The Wasps man is the man of the series despite only playing in two of the tests in Australia. Led on a path of redemption by Eddie Jones, he has come to the forefront. He is a fighter, he has eclipsed Warburton this year. One of England’s top performers in the Six Nations as well, he is well and truly nailed on to start on the Lions openside flank.

The eight has been up there with the best this year. It seems as though he is finally becoming the player we always knew he could be. Another powerful ball carrying forward and a man that can go toe to toe with Read. Vunipola powers over players but contrary to popular belief has a bit of speed to himself as well. Faletau isn’t far away.

Webb is electric, his pace and sniping breaks make him the frontrunner for the ‘9’ jersey, he has a pass too. Webb has been one of Wales’ stars for the last couple of years and has inspired Wales to a few massive wins lately. Youngs’ kicking is superior but Webb just nicks it.

Only one player could displace this player at the moment however he’s at 12 but we’ll talk about him later. Ford’s game management is becoming superior to any other player. His decision making is growing as well. The Bath fly-half has been among England’s top performers in Australia and his tackle counts would suggest his defensive frailties are no longer such a concern. 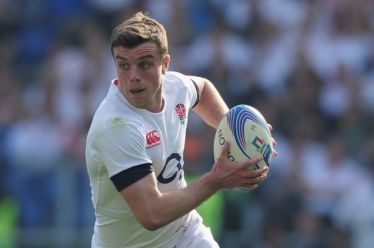 Ford is back to his best for England.

The Welsh winger had to be included after his performances against the All Blacks he terrorised Fekitoa in the first test, he could not be stopped, he tore through at pace. His abrasive edge and pace make him a lethal weapon in the wide channels. Would have had him at fullback but a certain Scotsman has that nailed down.

The Saracens centre is the best fly-half in the northern hemisphere, only problem with that is he’s also the best inside centre in the northern hemisphere. He works miracles for England here with Ford inside him. He is the best goal kicker in the world, that makes him priceless at international level. He is also a hugely influential defender, his desire is huge and his appetite to be the best is insatiable.

Could just as easily be Joseph but Henshaw’s power is important if we don’t have a powerful carrier at 12 we need one at 13. Henshaw is a hugely important player for Ireland and if given space by the two English playmakers inside him he will be given acres of space to wreak havoc in New Zealand. His defensive capabilities also make him important, defence will be key against the All Blacks.

Deadly, lethal two words that perfectly describe the Bath flyer. His feet are electric and his pace scintillating. He is also very capable under the high ball and he uses this to his advantage leaping up for cross field kicks which will be implemented due to his club mate Ford is being deployed at 10. Watson can score at will and he will score tries down under.

Jared Payne unlucky to miss out but the fullback is truly sensational, his speed makes him an asset to any team he plays for. Hogg is one of the most exciting fullbacks in the world, he attacks with verve and pace. The Six Nations player of the championship is going to be a massively important man for the Lions should he play.

So the player count is hugely skewed in England’s favour but surely after the Grand Slam and Australia series that is justified. England have nine players, Wales have three, Scotland two and Ireland just one.  Let’s just hope whoever is named can produce the result we got in 2013 in Australia.