Swansea are looking sharp and after another over performing season for the Welsh club they look as though they will only keep on getting better and hopefully they can continue to produce the performances that have even worried the big boys in the league.

Swansea’s opening day win at Old Trafford was a huge moment for Monk and his team it sent shockwaves through the Premier League, United a club in crisis, Swansea hard to beat. Goals were something Swansea didn’t struggle with netting 46 times. They enjoyed August with 3 wins which was followed up by a catastrophic September as they failed to win a game losing to Chelsea 4-2 a particular low point. November brought them another impressive scalp this time Arsenal as the creative club won 2-1 at home which over the season became a very tough place to visit with Swansea only losing 5 times at the Liberty Stadium over the course of last season, rather impressive whichever way you look at it.

Skipper Ashley Williams on the ball for Swansea.

They entered the year in 9th place following a harrowing 4-1 thrashing by Liverpool at Anfield which was a dampener for them to end the year on. This was the first match of 4 games that Swansea failed to win which ended with their worst result of the season Chelsea beating them 5-0 at the Liberty Stadium a result that hurt the club. They went on a run until the end of the season then as they only lost a further 6 games and claimed some impressive wins such as complting the double over Manchester United by winning 2-1. They also claimed their last win of the season over Arsenal at the Emirates Stadium winning 1-0 undoubtedly their best result over a so-called top 4 team over the season the clean sheet a particular bonus considering their defence was caught lacking somewhat over the season.

They made people sit up and take notice last season though with their rather attacking style of football that of they can improve upon this season could make them one of the most intriguing teams to watch. They play with passion, guile and a sense of calculated risk. Their attacking play was shown off with their big wins over the likes of West Bromwich Albion (3-0) and Hull (3-1) games that should have been more of a contest. If their captain Ashley Williams can rally the rearguard and add a defending aspect to their locker they could threaten the league order this season.

Swansea’s key player left last season as Manchester City captured Bony’s signature with him gone there were so many players to choose from. Gylfi Sigurdsson has become a key player for Swansea his attacking runs and intelligence over the park make him a key man for the Welsh outfit. He offers a creative outlet to create space for the finishers like Gomis and Michu. He imposes himself on the game with his creative spark that leaves defenders wondering how he effortlessly creates space for his teammates. He will be key for Swansea if they are to go 1 step further than last year and qualify for Europe. 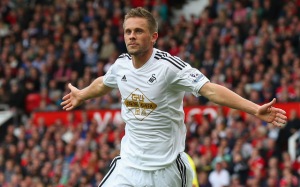 Swansea have seen 1 senior player leaves and they have brought in some excting additions with Monk not afraid to spend over the summer adding a few attackers and giving Fabianski some competition by bringing in some keepers to keep the Polish stopper on his toes. André Ayew is an interesting signing for the team a player that can play up front or just in behind your 9. He offers something different to the Swansea strikers that played last season. He is likely to be deployed in that hole and his pace make him a player to watch. Eder an expensive addition and another forward, his shooting range make him deadly and exciting to watch. His midfielders will relish having the Portuguese man to pass to as he is not one to miss good chances, a player that will definitely add some goals to Swansea over the season. The other high profile new man in Tabanou a defender from St Etienne, fans will be hoping he can at least go some way to stemming the flow of goals that led to Swansea conceding 49 last season it would have been more if not for their brilliant keeper Fabianski.

Leaving the club is 1 player, Jazz Richards not a huge loss for the club and a player that they don’t need to keep smart business all round from Monk.

Overall it looks as though if Swansea can iron out the creases it is a matter of when not if Swansea qualify for Europe.