Arsenal are one of the best teams in the country and from November time onwards the north Londoners were in excellent form. They were exceptionally hard to beat at the Emirates Stadium last year.

Arsenal have this amazing ability to mix the sublime brilliance with the horrific mistakes that cost teams titles which may explain Arsenal’s decade long trophy drought which haunted Arsenal until the 2013/14 season.

They walked away from last season once again having shown the inconsistency we have come to expect from the north London club having been as low as 8th in early December they then couldn’t stop winning after beating Manchester City 2-0 on 18th January.

On 10th February they started a staggering run of eight league wins as they beat Leicester City 2-1. It could only be ended by Chelsea in a 0-0 draw. This amazing run of form is the type of form that has made Arsenal such a formidable force not just in England but also Europe during that run they also defeated Monaco 2-0 away but crashed out of the Champions League due to the away goals rule.

Two trophies for Arsenal though marked a terrifically typical Arsenal season, Wenger walks away with the FA Cup and the Community Shield which must come as a huge relief to Arsenal fans.

Arsenal after their 4-0 win over Aston Villa in the FA Cup Final.

The revelation of last year was the Chilean midfielder Sanchez who arrived from Barcelona promising much and he delivered netting 25 goals in all competitions 16 of which came in the Premier League. He will be key to Arsenal if they are to mount a title challenge this season.

Alexis Sanchez celebrating one of his 25 goals last season.

Arsenal have not had a busy summer having only recruited one senior player for next year. They’ve recruited the experienced Cech from rivals Chelsea. The Czech keeper spent 11 seasons at Stamford Bridge racking up 333 appearances for Chelsea and winning numerous trophies in that time. He may well fill a shirt that Ospina and Szczesny just couldn’t nail down last season. 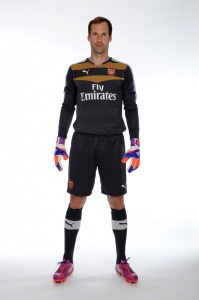 The Gunners have seen two faces leave the Emirates Stadium, in the form of French defender Diaby and striker Podolski. The former France international spent nine seasons at Arsenal making 125 appearances for the club scoring 14 goals in the process. He failed to impress enough to make himself a regular under Wenger. Podolski arrived in 2012 but spent a large part of last year on loan at Inter Milan having failed to make the lone striker’s shirt his own. The capture of Danny Welbeck last summer sealed the German’s fate.

If Arsenal can replicate their form at the tail end of last season there is no reason they can’t finish 2nd and mount a serious title challenge. One thing is for sure it will be an interesting season for Arsenal.