The long wait was finally over for Bristol, they secured promotion back to the Premiership at the seventh time of asking and they have made some serious progress.

There are a number of star names in the Bristol camp, a man with Gavin Henson’s CV is always going to be a talented player pair that with the new duo of Jordan Crane and Tusi Pisi and the squad has quality.

Bristol have a creative backline led by Samoan fly-half Pisi and the creative midfield should give space to the pace and flair of the quicker players out wide such as former Leicester and Wasps winger Varndell.

The pack is match for most Premiership sides without having any big names and lacking internationals. They should not encounter much in the way of trouble.

The playmaker has it all as an inside centre, he kicks, passes and tackles well, his pace is not quite what it used to be as he enters his mid-thirties but his playmaking ability make him a valuable player.

Henson also brings international experience and a big game knowledge to a team lacking much of that, he is among a splattering of internationals brought in by Andy Robinson to help Bristol acclimatise to the high level Premiership and Challenge Cup games they will face.

A ferocious tackler who’s size makes the tackle area a really difficult area to establish any dominance against the Bristol skipper. This coupled with effective breakdown work sees the Bristol captain dominate the immediate tackle situation.

Lam is also no stranger to attack and is more than happy to pop up on the inside shoulder of a fly-half to terrorise opposition tens.

Varndell is an absolutely unbelievable finisher, up there with the likes of Cueto and Hanley he can score from anywhere due to his pace. He adds some ‘X Factor’ to the Bristol backline. 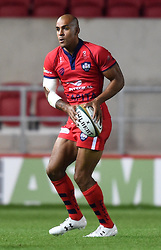 Varndell in action for Bristol.

The 30 year old will be Robinson’s main attacking outlet this season, and it is a joy to ahve the talented winger back in the Premiership.

Tusi Pisi is a good signing providing them with talent at fly-half. Arscott also has a lot of top level experience making him a clever capture along with number eight Crane. Everyone knows what Tonga’huia is capable of.

Pisi lining up a kick for the Sunwolves.

Genge is a hot prospect and will be missed especially as he is now gaining recognition from Eddie Jones. Mama is a good player and could have been hugely influential for Bristol. What a way for Dwayne Peel to end his career and a glittering one at that.

Bristol will not be challenging for the top half but relegation doesn’t look likely.