The current World Championships in Beijing have been marred by talk of drugs such as the two Kenyans which were found to have been doping. The cheats have of course been kicked out of any races they were due to run in the Chinese capital.

The big drugs story from Beijing was of course that of American two time drug cheat Justin Gatlin against clean, unbelievable Usain Bolt in what the media billed as a hero versus villain encounter, as Bolt won the 100 metres final with the 200 metres happening on Thursday.

The IAAF, run by former Team GB athlete Lord Coe has failed to take enough measures to ban high profile athletes like Gatlin, Gay, Powell etc. The fact that sportswear brand Nike have continued their sponsorship of Gatlin makes me feel sick. Lord Coe who holds an ambassadorial role with Nike has refused to give up his six figure salary there even though they continue to sponsor the cheating Gatlin. 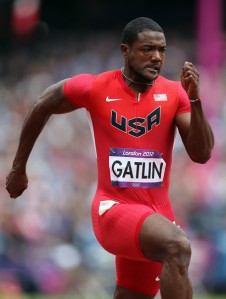 Justin Gatlin at the 2012 Olympic Games.

Four of the eight runners in the 100 metres final ran on Sunday had been accused of doping including Gatlin and former world record holder and fellow American Tyson Gay. This is wrong how is it that the IAAF are letting four cheats run in the second most prestigious championship in athletics?

Gatlin is an example of the spineless nature of the former chief of the IAAF before Seb Coe took charge of one of the most important sporting bodies the world.

Bolt must win on Thursday and that hopefully will kickstart his run into a glorious gold in Rio de Janeiro. If Gatlin wins on Thursday or even worse next year what is to stop him becoming a role model?

Usain Bolt held off the challenge of Gatlin to claim gold in Beijing 7 years after smashing the world record there.

This toxic drug culture has to be stopped and the only way to do that is for the IAAF to start with lifetime bans for all of the cheating, doping athletes. These athletes do not deserve to represent their countries and compete in these amazing cities like Beijing or Daegu. Lifetime bans are the only way to stop these people ruining sport.